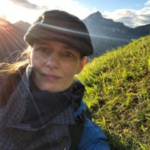 Corina employs a plant-free approach to animal-based nutrition as a remedy to her long-term vegan and vegetarian deterioration, severe joint pain, and skin conditions. She has learned how to take optimal care of her body and is now feeling better than ever!

I hope you as inspired as I am after reading Corina’s story!

My Name is Corina Diana Chladek, I live in Switzerland, the land of cheese and chocolate.

Nutrition has always been a passion of mine, and I have experimented around a lot, basically tried everything to improve my health.

I grew up on a western omnivore diet, but already back then I ate a lot of Swiss chocolate and sweets and loved Swiss cheese. Around age 20, I became a vegetarian after seeing those propaganda pictures from Animal Rights Activists. Still ate loads of cheese – after all, as Swiss person, it’s a tradition.

Only much later, around 2007, I found out I was intolerant to dairy. So I weaned off of both, sugar and dairy cold turkey all at the same time, which was very hard. Stayed vegetarian until 2011. One year of meat eating-omnivore diet during 2012 during a China trip with Taiji group, when I was into Martial Arts, which made me feel really good.

Unfortunately, I went vegan in 2014 for various reasons. Then tried even Fruitarianism in 2016 for about a year with a lot of vegan cooked food cheating in between. But all those fruit smoothies have certainly wrecked my liver. I developed sensitive teeth and was probably pre-diabetic. Back to veganism until the end of 2018. Felt so awful. Hypothyroid symptoms at this point too. 2019 I started eating meat again. Finally.

How long have you followed a carnivore diet?

April 1st was my one year anniversary, not an April Fools joke. Best anniversary I ever had, because it was really meaningful.

How did you hear about carnivory and the zero fiber approach?

First I heard Dr. Natasha Campbell-McBride talk about it, I read her book at the time I was doing Paleo and not thriving nor doing well on sauerkraut or other fermented foods. Then I heard a FB friend talk about it, she had healed her Fibro with it, but another friend said it was dangerous. So I was hesitant at first. Then I learned about Oxalates. And I started watching Shawn Baker and other Carnivore videos like Primal Edge Health’s youtube channel too. And Ex-Vegan videos. Those REALLY helped me, you begin to see the parallels, right? I saw the same emaciated look in myself as those other Ex-vegans.

What made you want to try this WOE for yourself? Where were you coming from at the time?

Veganism failed me. My health had declined during that last year of being vegan (2018) I had chronic back pain, whenever I got out of bed in the morning, I had to sit down because I was in pain, I could not stand for longer than 30 min, my hip was giving me issues and massage increased the pain, nothing helped, and joints were inflamed too – I could no longer draw my favorite Celtic Mandalas, it hurt too much when I held the color pencil, only after going carnivore I started drawing again.

I used to have migraines on a regular basis, fatigue, depression, dry skin issues (in particular in winter I could not sit cross-legged because it would itch too much) and even vision started to get worse. And I was so bloated all the time, I could not even close my pants, and it was not a weight issue.

I just felt awful. And I was really getting worried. DESPERATE. But, as Lierre Keith so eloquently described it in her book, no vegan will ever make this a lighthearted decision, you will only start to eat meat again when you feel absolutely miserable.

Was starting a carnivore diet hard? Were there any unexpected flare-ups or side effects?

First, as a Vegan, of course, I felt very guilty. I looked around before I dared to buy my first piece of meat at the health food store, expecting a vegan jumping at me from behind the shelf. That’s how programmed I was. But I grew out of it. The brain can change after all…

I finally went carnivore after 3 months of Paleo/AIP/GAPS I had no such big issues save for the usual die-off of the carb eating critters.

The adaption phase lasted about 2 months, but after 1 month my depression was gone and after 3 months all the other issues were gone, except histamine related migraine. Around 5 months in I felt tired which was resolved with a potassium supplement.

The only remaining issue to this day are those histamine intolerance related migraines, they can occur from many different things like sleep deprivation, stress, oestrogen peaks, too much noise and sensory overload, too much socializing, summer heat, too much exercise, strong perfume, a hot bath,  meat that was in the fridge for too long, bone broth, bacon, smoked salmon, and dehydrated meat. The pattern was always the same: fatigue, exhaustion, brain fog, migraine, inability to talk fluently, feeling irritated or anxious or both, sore throat, runny nose (sometimes congested) muscle pain similar to flu, sometimes joint pain, but I never knew what I ACTUALLY was dealing with. The only thing that helped with that was silence, rest and solitude.

I learned about Histamine Intolerance only recently. For me DAO supplementation works great, I, therefore, have resolved this issue too, it’s clunky, but it is better than taking Ibuprofen, which is a symptom treatment. At least a DAO supplement will deal with the histamine properly, which Ibuprofen does not.

I can even exercise again that way without feeling exhausted and getting a migraine. It all began in 2007 after the burnout on a carb-loaded vegetarian diet and marathon running. After that burnout, which was possibly like the last straw to break the camel’s back, I could no longer run more than 5 min without feeling pain all over my body. So I stopped running for good.

I am still not sure at this point if this is also a gene-related MastCellActivation Syndrome issue. Will have to look into that further.

How long until you saw results? What is your marker of “healing”?

The first marker of healing happened ONE month into the diet: my depression was gone. 3 months into it, all pain-related issues (chronic hip and back pain) just GONE!! I was like: Oh WOW!!

Were your family and friends supportive of your choices?

I just do my thing. Since it is still controversial and people start to lecture you on how important veggies are, I don’t talk about this that much in my environment – except online, in the carnivore community on FB and my youtube channel.

Do you track macros or calories?

No, never have. I just eat when hungry. I don’t believe in calorie counting.

Do you supplement with anything?

Because of my Histamine Intolerance (which results in migraines – in particular during oestrogen peaks, exercise intolerance, summer heat intolerance, sensitivity to stress, anxiety, irritation, and sleep issues), I am taking a Diamine Oxidase Suppl. on a daily basis before meals. This has greatly improved my quality of life. This was like the last puzzle piece.

What is your current view on vegetables and plant foods?

My body does not like plants. I get bloated. I once tried Sulfuraphane (when I was in my Paleo phase)  – a bad mistake, got so bloated and had a migraine. Plants disagree with my body. So at this point, I avoid them.

Do you ever think of reintroducing plant material to your diet?

I think I’ll wait for some more time. My body still has healing to do obviously. Maybe sometime later. I will see I’ll leave that open, right now I really do not feel like it.

Do you ever miss a specific food, meal, or texture?

I used to love crunchy stuff. But actually I do not really have cravings anymore, one feels so satiated from meat and animal fat, possibly the brain gets what it needs, so there is no restlessness or thinking of a particular food.

I am just looking forward to eating my meat every day, beef is my favorite, but duck is great too and occasionally pork or wild boar or seasonal game.

What does a typical day of eating look like for you?

I keep my meat in the freezer to avoid histamine build-up, so I take out the meat I want to eat the next day and put it in the fridge – meaty meals are basically the same every day:

I am extremely glad that I had the courage to try it out, even though a FORMER friend said it almost killed her (no idea how she managed that). I trusted my gut (haha literally) and I had tried everything else, I went from omnivore to vegetarian to vegan to fruitarian back to vegan and then tried Paleo, Paleo AIP and GAPS and thanks to Dr. Natasha Campbell McBride who in her book wrote, that there are indeed autistic children who simply do not tolerate ANY plant food, I thought, I might be just like them, so there was nothing to lose…

A carnivore diet has not only reversed my chronic pain issues and inflammation but greatly improved my mood and depression is gone. What a relief.

I regret that I have been Vegan for too long. Now it takes all this time to heal and restore the body back to normal. But at least, now I know what Veganism does to you. And I can warn others. Hope they listen.

Are you ready to try animal-based nutrition for yourself?

Use our Carnivore Diet guides to get started!

Join our private membership for weekly coaching calls, and accountability, plus ongoing inspiration from like-minded people seeking to improve their health!